Try these Cool iPhone Tricks to Enhance Your Experience 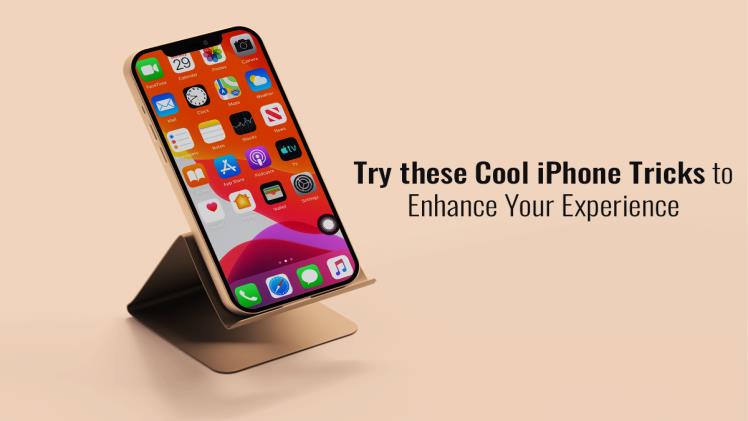 Apple is known for manufacturing top-tier devices across numerous categories. A great example of this is the range of iPhones the tech giant launches every year. Ever since the release of the first-ever iPhone almost two decades ago, the demand for the top-tier smartphone models has kept increasing over the years. As per Gadgets Now, there are multiple reasons why people choose to go for iPhones as their primary smartphone over other types of smartphones like the ones based on Android or other major operating systems. For starters, iPhones are known all around the globe for offering top-tier security to users. Besides this, Apple’s range of smartphones does not feature any bloatware and ads, as opposed to the majority of smartphones powered by Google’s Android OS, which feature many annoying ads and pop-ups on different screens.

Another major reason every iPhone model stands tall above the rest of its competitors is its highly-optimized and visually appealing feature-packed operating system called iOS. iOS features various top-tier features and functionalities that facilitate users to perform even the most complex and demanding tasks without hassle. Whether users use their iPhones to watch online content, play games on the highest graphics settings, or simply make calls or send messages, iOS handles each task with finesse. Thus, users face no sort of lag or interruptions while using their powerful smartphones. Moreover, users can further enhance their iPhone-using experience by implementing certain tricks and get the most out of their iPhones. This article will list some of the coolest iPhone tricks following which users can have an immersive experience. Let us dive right into it:

iOS is known for offering top-tier native apps and functionalities, each of which facilitates users to perform different activities with ease. However, there are instances when users prefer using a third-party application instead of the native one, mainly because they wish to access features that the native apps do not have. For instance, if you own an iPhone, you may prefer using a third-party browser like Chrome or Firefox over Safari. Similarly, you may not like the default Mail app enough to use it as your daily driver for managing emails. Thankfully, iOS allows users to change default apps with their preferred ones. For instance, if a user wishes to change their default web browser app or email client, all they need to do is navigate to their iPhone’s Settings app, scroll down to find the browser and email app, click on them, and set the preferred applications as the default one by removing the native ones.

Even though the home screen of iPhones looks aesthetic when they have tons of applications present on them, some users prefer to have a clean-looking main screen. One of the easiest ways to have a simple and classy-looking home screen is to place apps in folders based on their category. iOS offers numerous ways following which users can create folders in iPhone. One of the easiest ways to get the job done is to tap the app which you wish to put in a folder and place it on another app of the same category. Doing so will place both apps in a folder. To avoid confusion, it would be best if you name the folder as per your preferences. Besides this, users can also organize their iPhone’s Files app by creating folders. To make a folder in the Files app, all users need to do is open the app, tap the three dots icon at the top-right corner of the app, and use the “New Folder” option. It is a great organization method that tons of iPhone users all around the globe use.

Apple’s iPhones are known for having the best camera systems, which makes it natural for users to click tons of pictures and store them on their iPhones. However, there are instances when the storage space gets full due to having too many pictures. While trying to vacate space, users may end up deleting important pictures. Thankfully, there are numerous ways following which users can retrieve deleted pictures without hassle. For instance, users can try recovering photos from the “Recently Deleted” folder in the Photos app. However, there may be times when users need to recover permanently deleted pictures on their iPhones. To do so, they would need to use the Disk Drill macOS app by connecting their iPhone to their Mac using a USB cable. Besides this, another effective method of recovering deleted photos is by re-downloading the pictures from the iCloud backup.

iOS is full of amazing features and functionalities. Sadly, not many people know about the tricks they can use to utilize their iPhones to the best of their capabilities. If you own an iPhone, follow the aforementioned trick to get the job to have an enhanced experience.

What You Need To Know About Carpet Cleaners Houston

7 Things to Consider When Selecting a Chicken Hatchery Machine