Basic Reversal Candlestick Patterns You Should Know About 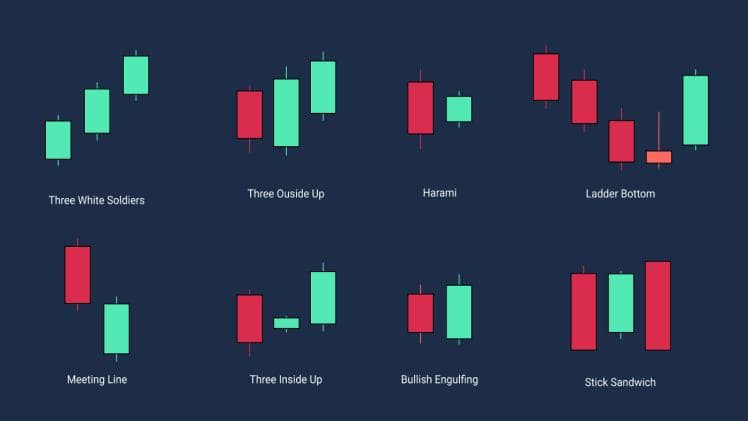 There are many technical analysis methods that allow you to search and interpret various patterns of price candlesticks, and some of these patterns may serve as strong signals of trend reversal. It’s very important for every novice trader to learn at least a couple reversal patterns to predict powerful price movements. In this article, we explain how these patterns work and give you several basic examples of frequent patterns you can look for.

Basically, a pattern is a typical candle formation that’s associated with certain logic of price fluctuation: if you see a clear pattern, you can usually predict how the price will behave in the near future. Pattern searching is especially useful in Forex trading since they can warn you about a coming change of the main trend or a beginning of correction. Let’s take a quick look at the most usual reversal candlestick patterns you can use in day trading.

Such patterns are made by three candles: two candles on the sides have small shadows, and the one in the center has a long shadow that follows the main trend. Pin Bars are considered strong signals on their own, but they can also be a part of even stronger formations called Hammers. Such patterns can be spotted at the end of a downward trend: the trend slows down, and then a Pin Bar appears with its central shadow looking toward the old trend.

This simple pattern is similar to Hammer, but it consists of just two candlesticks. You don’t need a Pin Bar here, just look for a reversal candle that fully engulfs (hence the name) the previous candle. The bigger it is, the stronger the signal of a coming trend reversal: if it’s about 2x larger, prepare to open a position and wait for another candle in the new direction for confirmation. Engulfing gets quite obvious to spot after some practice, and it’s a great pattern for novice traders.

Another great reversal pattern, Doji looks a little like Pin Bar: a candle without a body appears after an especially strong upward or downward trend, revealing an equilibrium between sellers and buyers. An opposite candle appears next, confirming the pattern. The main difference here is that the candlestick in the center can have its shadow pointing in any direction: even if it argues with the preceding trend, such a pattern is considered complete.